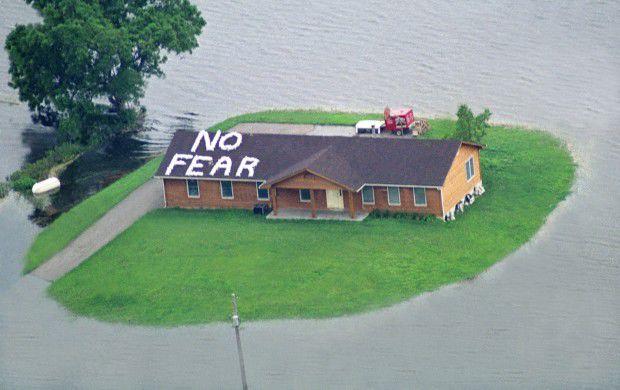 You’ve heard it said, often, “this is uncharted territory.” In many ways coverage of COVID-19 is uncharted territory, especially with so many technological advances. But for some of us, there are similarities to an event we covered awhile back, the midwestern flood of ’93. The scale was obviously smaller than the global pandemic. But for our region it was all encompassing. Some of the lessons we learned could help you navigate this intense time.

The first thing we learned was not to overplay events. We avoided superlatives. People were losing their homes, entire neighborhoods, towns, crops and others were getting sick from the flood water. It was especially hard watching families learn they would have to give up the land that many generations before had lived upon. How to start again? The constant stories of loss were hard. There were inspirational stories too. But sometimes you really had to look. The coverage quickly became hard for viewers to watch. We had to temper it somehow. So we chose to stick with facts and not embellish. We also looked for the “heroes” as much as we could.

This time around it can be harder to tell the hero stories since it is frankly too risky to cover a lot of the stories on the front lines in hospitals. But the stories of people stepping up and helping are still important and it can be most effective to let these stories tell themselves with longer bites, natural sound or just showing the Facebook post with no commentary around it. Notice I did not say no background. That’s different. Background is information that gives context to what the viewer is seeing. But in today’s world we’ve encouraged anchors and reporters to put themselves in the stories and discuss their feelings too. We were asked to do the same in our flood coverage back in ’93. It worked at first. But as coverage continued and the damage kept coming, we felt it starting to backfire. Managers should really try and sit down every few days and gut check the coverage this way. Sometimes there’s just too much human emotion in newscasts for viewers to handle. Anchor commentary is an easy thing to reduce. The facts are craved. So, feed more of them to viewers.

Another big lesson we learned is, the viewer isn’t with you all day consuming every minute detail of the events the entire time. They are immersed in the situation in a different way. Do not assume they know the basics.  Many are trying to work, clean, teach the kids, cook, order groceries you catch my drift. So they may not be as clear on things like, how much did the flood water rise (flood of ’93) or how much COVID-19 cases in your area have increased overnight. Don’t assume they know know when the river will crest (flood of ’93) or the latest projections for the surge to happen. Viewers like hearing that information every time. Because they are not watching you all the time. They are not reading your updates all day long on the website, Twitter and App blasts etc. In fact they are purposely taking breaks to try and escape the harsh realities. When they do look, they want it boiled down so they do not have to linger too long. The lingering causes more anxiety and stress. This is good to keep in mind for story selection, which elements to showcase and how much you push crews for new content. I am fond of the saying “this is a marathon not a sprint.” It really applies to coverage of COVID-19. Do not withhold important facts. But if you are working on a lot of sidebars and a huge development happens you can hold the sidebars for a mini lull in coverage. It’s better to eat a huge meal in courses rather than shoving it all down your throat at once.

The next two nuggets are for crews braving it in the trenches each day. First and foremost, big gets are great, but safety is more important. This kind of coverage really dictates that you give relevant information that can get your viewer through the day well informed. That means practical elements. Did cases go up overnight? Is Lowe’s closing tomorrow? Is toilet paper finally in plentiful supply? If not, when? There is a place for big gets like a company hiding supplies, people stockpiling items for black market sales etc. But the daily, practical, very useful information will more than satisfy the viewer starved for information and clarity. And you can stay safe. Going into hot zones just to show what is happening and that you were there, is just not smart. Ask people in the hot zones to send you video from their phones. Set up a Zoom session with someone. But make sure your safety is a high priority.

During the floods I drove into a rural area where the flood water was about to crest. My car got stuck. No cell phones back then. But, luckily, a farmer with a tractor came by just in time to save my car and drag it to his house. I filed my live report from his kitchen phone, while his wife made dinner. I made deadline. But my manager was furious. All he kept saying was that the perspective was nice, but it was not worth possibly loosing me! I never forgot that lecture. Please heed that advice. Especially MMJ’s. I was one for part of that flood coverage. It was scary and lonely and I got into a few tight spots. I could have played it safer and brought viewers the same relevant information.

On your days off try and take a break from the story as much as possible. It will not be hard to catch back up and you need to feel that life can go on without the story. When the floods finally tapered off, many of us really came down hard from the intensity of the coverage. Those that took mental breaks on their off days seemed to bounce back faster. You have a right to nurture your own mental health too.

Finally, this one is for the bosses. If you have the resources try and have someone looking for non COVID-19 stories each day also. There are plenty. And some could be very important. Even one strong non COVID-19 story every few days can make a huge difference to your staff and your viewers psychologically. It also gets you geared up to start thinking about how to transition out of this coverage when the time comes. (More on that in an upcoming article.)

We covered the after effects of the flood of ’93 for years. It eventually became half of each newscast, then a section, then a story and finally an occasional look back. But at its height it was all encompassing. You literally lived and breathed the stories. Many of us were canoeing to places after our live shots in order to help people sandbag. We helped with fundraisers in our off time. We got attached to families we covered and did check-ins. It was one of the most draining, but also gratifying, times in my career. It was excruciating to sit by unable to help as the raging water took another house, town and person’s dreams. The illnesses from the water spread and we had to get Tetanus shots. You never forget the smell once the water recedes and the mud sticks to walls like cement. Then as the cleanup began we were able to help people find hope with information on programs, support groups and even Army Corps of Engineers designs to prevent another breach in an area that often swelled. We dealt with the swarms of mosquitos and fears of the diseases they carry. Being a journalist who could help provide key facts at key times was extremely hard, but also very rewarding. Hopefully many of you will be able to look back and know you helped a family, a business, or a community survive and prosper because of the hours you put in, the extra fact checking you did and the stories you shared. Good luck and Godspeed. (FYI Image used was taken by Sam Leone and used in newspapers across the country in mid July 1993)